WHAT IS HOLE CAPTURE SPEED WHEN PUTTING THE GOLF BALL?

Most golfers hear how critical speed and distance control is on lag putts or the longer putts. But learning the correct speed for your shorter putts is equally important because of something called "hole capture speed".  For the hole to "capture" the golf ball, it has to drop 7/10ths of an inch below the surface of the green. With a 4 1/4-inch cup, when the golf ball starts getting toward the sides of the cup, if it's traveling too fast, the ball will not have enough room and time to drop the 7/10ths of an inch and will pass over the lip. Just to give you a sense of how much the golf ball's speed impacts its ability to drop in the hole - for every six inches of speed the ball goes by the hole we start to lose 12 percent of the capture size of the cup! So, for those of you who like to ram the ball in really hard and use that speed to remove some of the break on the putt, what you're actually doing is making the hole smaller for yourself. What we want to do is give the ball a chance to arrive at the hole at a speed that would go no more than a foot by the hole if it were to miss the cup.

Josh Zander - Class A PGA Professional and Voted Top 100 Teachers in America by Golf Magazine shares a great lesson on the "capture speed" of the golf hole when putting. While most golfers tend to think more about putting speed and distance control when lag putting, it is also crucial when near the hole - as the faster the ball speed the smaller the hole becomes.

Here's a drill to learn about hole capture speed. The goal is to either have the ball go in the hole or travel no farther than 12 inches past the hole. Putt three golf balls from six feet away from the hole. Take note of the putts that are not dead center, but they lip in because they had proper speed. Once you can either hole three putts or have the speed maintain the balls no farther than 12 inches past the hole, move back to 9 feet. Repeat the drill from 9 feet and then 12 keep feet. 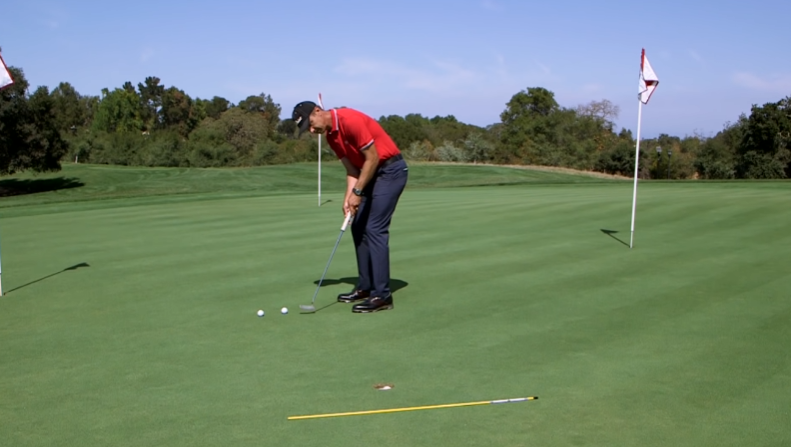 Doing this drill and being very mindful about hole capture speed will help you develop excellent distance control.  You're going to give your ball a chance to go in and at worst it's a two putt. So distance control on short putts is absolutely crucial if you want more one putts.

HOW DO YOU HIT A LOW TRAJECTORY KNOCKDOWN SHOT? You hit a low END_OF_DOCUMENT_TOKEN_TO_BE_REPLACED

WHAT IS THE BEST WAY TO PRACTICE GOLF?The best way to practice END_OF_DOCUMENT_TOKEN_TO_BE_REPLACED

HOW DO YOU SCORE BETTER THROUGH GOOD COURSE MANAGEMENT? Never hit a END_OF_DOCUMENT_TOKEN_TO_BE_REPLACED

HOW DO YOU GET THE MOST OUT OF YOUR HYBRID GOLF CLUBS? Use END_OF_DOCUMENT_TOKEN_TO_BE_REPLACED

HOW DO YOU HIT A 50-YARD BUNKER SHOT? The 50-yard bunker shot END_OF_DOCUMENT_TOKEN_TO_BE_REPLACED