Even God Must Practice Putting with Dave Dolengowski 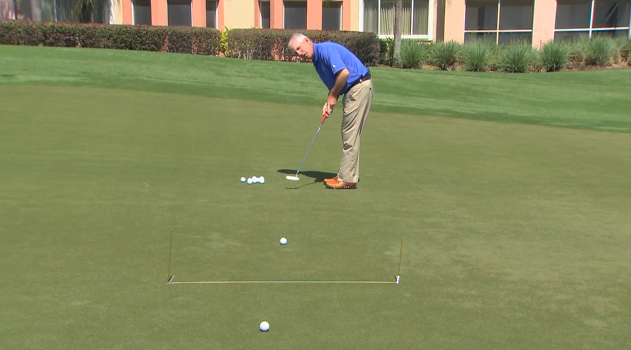 HOW DO I CUT DOWN ON THREE PUTTING?

Senior Instructor at the Marriott Golf Academy Dave Dolengowski gives a great lesson in speed control in your putting game. While it would be great to hole every putt, we know this is simply not highly probable. But if you're controlling your speed well, a missed putt should have very high odds of being sunk on the next shot because it should be approximately 12 inches or less past the hole. Dave demonstrates a terrific drill which will help you learn to control your putting speed better which is almost like increasing the size of the golf hole.

Don't forget the enormous potential to lower your golf scores by improving your putting skill. The first key is learning to get your ball within three feet of the cup (the circle of love) at least one stroke faster. For most golfers, their putting accuracy from within three feet of the cup will soar to over 70%. Top golfers will exceed 95% accuracy when within three feet of the hole. Next, we want to learn to manage the speed we roll the ball.  Ideally, we would never leave a putt short. But conversely, the faster you roll the ball, the smaller the cup becomes.  So ideally, we don't want to leave a putt short but we also don't want the ball to go past the hole so fast that it has little chance of rolling into the cup or ends up with another difficult putt from outside 3 feet.

A great little drill to work on your speed control is to set up a line on the ground.  A thin piece of yarn between two tees can provide a great visual target.  Your goal is to putt ten golf balls over the line, but no further than 12 inches.  Practice this drill from different distances and from different positions on the green.  Practice hitting uphill and downhill.

And if you are looking for some variation to this lag putting drill, you can also use the ladder drill. This is another highly effective drill which focuses on developing great putting distance control.

Spend 50% of your practice time on the putting green. Spend 50% or more of that time working on your distance and speed control.

HOW DO YOU HIT A LOW TRAJECTORY KNOCKDOWN SHOT? You hit a low END_OF_DOCUMENT_TOKEN_TO_BE_REPLACED

WHAT IS THE BEST WAY TO PRACTICE GOLF?The best way to practice END_OF_DOCUMENT_TOKEN_TO_BE_REPLACED

HOW DO YOU SCORE BETTER THROUGH GOOD COURSE MANAGEMENT? Never hit a END_OF_DOCUMENT_TOKEN_TO_BE_REPLACED

HOW DO YOU GET THE MOST OUT OF YOUR HYBRID GOLF CLUBS? Use END_OF_DOCUMENT_TOKEN_TO_BE_REPLACED

HOW DO YOU HIT A 50-YARD BUNKER SHOT? The 50-yard bunker shot END_OF_DOCUMENT_TOKEN_TO_BE_REPLACED