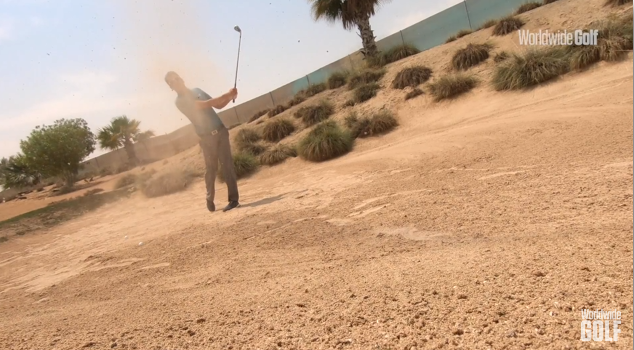 HOW DO YOU HIT A 50-YARD BUNKER SHOT?

The 50-yard bunker shot is one of the most challenging shots and should usually be played with a less lofted club iron than your sand wedge, such as a gap wedge or 9-iron. You'll setup with a standard "V" address, like you would for a regular bunker shot with a high lofted wedge. You're going to dig in with your feet, open the club face slightly, swing along your body line, and you're going to make sure that you're getting plenty of sand. The 9-iron will have less bounce, so it will require you to shallow out your angle of attack.

A long 55 to 65-yard greenside bunker shot is one of the most dreaded shots you face on the course. To have the best chance at a good outcome, you want to start by making a good club selection, followed by a proper setup and finish with good shot execution. Because this is a shot with a high margin of error, you want to reduce the odds and put them in your favor.  As noted, you can start by using a less lofted iron than your sand wedge, like a gap wedge or your nine-iron.

PGA Professional, Mike Bolt, of Trump International Golf Club Dubai, Scott Bunker - Class A PGA Member and Director of Golf at Red Mountain Ranch Country Club, and Steve Adamiak PGA Teaching Professional at the Legends Club at Temeku Hills share step-by-step lessons and demonstrate how to play a 50-yard bunker shot. Each share specific insights for making this challenging shot more manageable. The most critical element discussed in this lesson is the club selection and the reasons why choosing a less lofted club will make this shot more manageable. 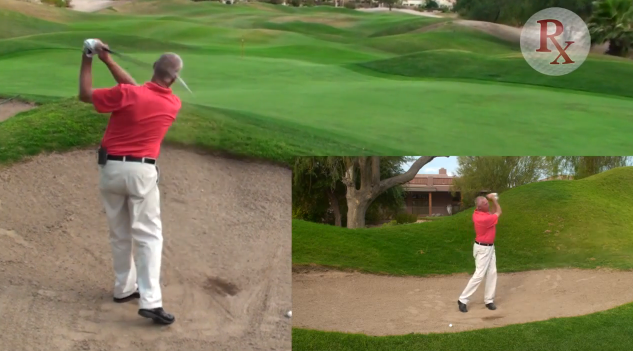 Facing a long greenside bunker shot can produce some extra anxiety. With this distance, the sand wedge is probably not going to work to be able to carry the distance. It's already challenging enough to get a sand save, but some of the longer shots often have us feeling that we need to be extra aggressive, which can result in form breaks, including striking the sand too close to the ball. If you're faced with a more extended greenside bunker shot, it's perfectly acceptable to get more club, such as a gap wedge or, in some cases, even a nine iron, so that you don't have to feel like you have to swing so aggressively. This will allow you to swing with a smooth, comfortable rhythm, maintaining your best form and striking the sand exactly where you intend behind the ball.

The tricky 55-to-65-yard bunker shot is difficult for a number of reasons. First, we don't practice it that often. Second, secondly the margin for error is not in our favor. It's a really difficult shot to execute. However, if approached in the right way this golf shot can actually become quite manageable.

So again, instead of using a high loft sand wedge and trying to fly the ball all the way to the hole, with a difficult strike, we're going to change to a low loft club - in this case a 9-iron - and try and run the ball towards the hole.

We're going to set up with our normal setup for a bunker shot. The club will be just in behind the ball with slightly more loft on it than normal. From there, we're going to make a full swing striking just behind the golf ball taking more sand than usual. The 9-iron doesn't have as much bounce as our higher loft sand wedges, so we're going to try and glide it through the sand with a shallow angle attack instead of being steeper as we may do with a normal bunker shot. We're going to work much shallower into the ball and almost sweep the sand, pushing the ball forward. This should create a lower trajectory and run the ball back to the pin at the back of the green.

When faced with a high risk, high difficulty shot such as this, the most important thing is to get the margin for error in our favor and make the shot as manageable possible. By changing to a 9-iron and changing the impact factors to help us with a strike pattern we've got the best chance of getting the ball on the green and avoid in a big score from the bunker.

In some situations, you're going to be able to tell yourself that you can take a little more sand be a little bit more aggressive hitting the sand. You're still going to setup like normal like you would with a high lofted wedge. You're going to dig in with your feet and you're going to make sure that getting plenty of sand. 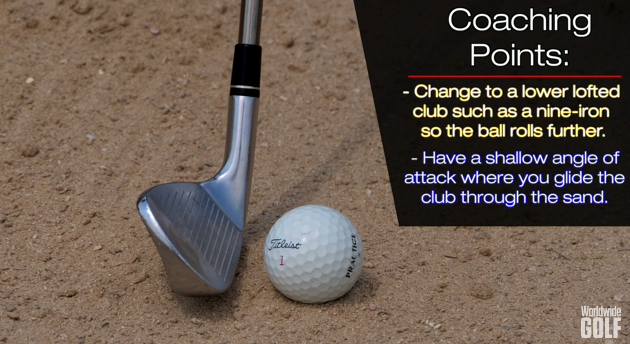 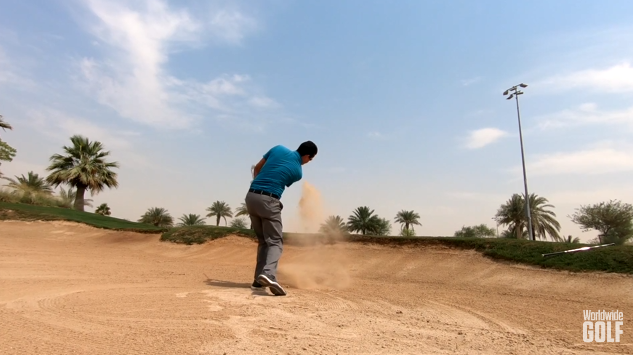 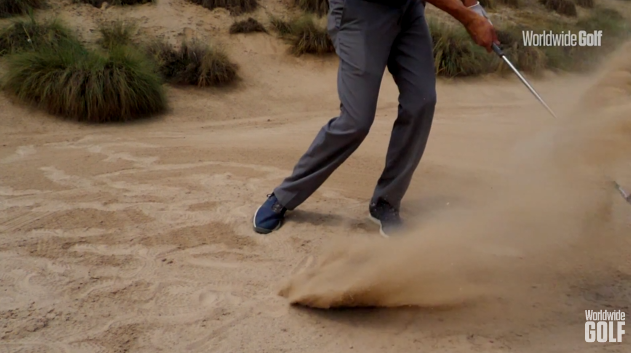 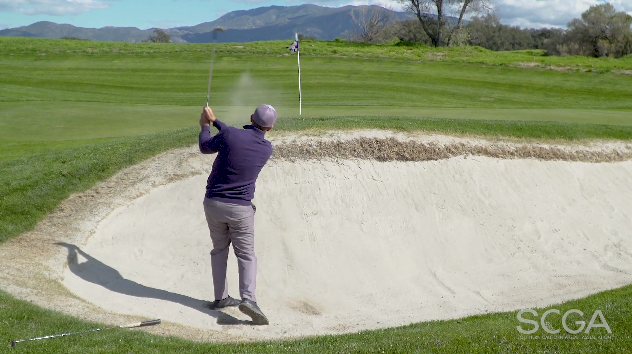 When we get into a bunker don't always think that you have to take your highest lofted sand wedge. What often happens in those situations is that when you feel like you have to take that high lofted club and hit it a farther distance, the first thing that you're going to tell yourself is that you have to hit closer to the ball. We don't want to do that. Make it easier on yourself by hitting more sand and at least getting the ball out. Instead of worrying about hitting one way over the green and adding shots take a lower lofted wedge, like a gap wedge, pitching wedge or a 9-iron.

Steve is a PGA Teaching Professional at the Legends Club at Temeku Hills. He has over 15 years of teaching experience, with 9 years in the Temecula Valley area. He was formerly Director of Instruction at Redhawk Golf Club and has trained with the prestigious Jim McLean Golf School at PGA West. Steve has worked extensively with all types of skill levels and has proven his coaching expertise by developing some of the best juniors in southern California, including many players from the CIF Champion Great Oak Boys Golf Team.

In addition to being a former PGA Inland Empire Teacher of the Year recipient, Steve is most proud of his US Kids Golf Top 50 Junior teacher honorable mention award. He also instructs many future teaching professionals at the Professional Golfers Career College on a weekly basis. Steve resides in Temecula with his wife, Dawn. When not teaching, Steve still enjoys playing competitively and traveling to golf destinations on his bucket list.

HOW DO YOU IMPROVE YOUR 50-YARD PITCH SHOT? The "broken tee drill" will END_OF_DOCUMENT_TOKEN_TO_BE_REPLACED

WHAT'S THE BEST DRILL TO LEARN TO SWING A GOLF CLUB? One of END_OF_DOCUMENT_TOKEN_TO_BE_REPLACED

WHAT ARE GOOD EXERCISES TO INCREASE MY CLUBHEAD SPEED IN GOLF?One of END_OF_DOCUMENT_TOKEN_TO_BE_REPLACED

HOW DO YOU LEARN TO HIT YOUR PUTTS STRAIGHT?Since every putt should END_OF_DOCUMENT_TOKEN_TO_BE_REPLACED