Flop to the Top with Keith Williams 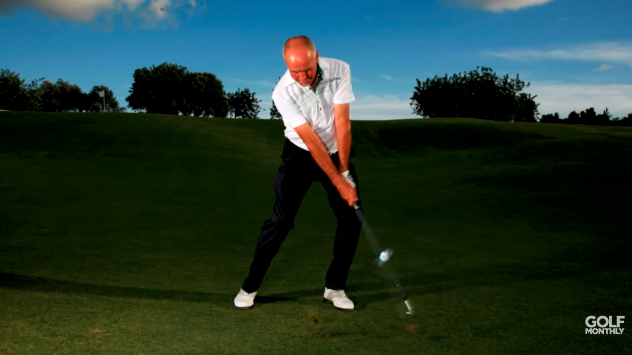 HOW DO YOU HIT A FLOP SHOT TO AN ELEVATED GREEN?

Sometimes it's not the lie or distance that dictates the shot, it's the elevation and pin placement. When find yourself approaching a green that is considerably elevated, a flop shot is one of the most difficult shots in golf but is sometimes necessary when your path to the pin is obstructed and you cannot hit a normal chip-and-run shot. While the flop shot can be effective, it's often not your highest percentage shot for getting it close because there are more things that can go wrong. Your first option should be to simply run the ball up to the green if the path is unobstructed and the fairway and fringe accommodating. However, there's situations that will demand a high soft flop shot, especially when the pin placement is forward on the green. Golf Monthly Top 25 Coach Keith Williams shares a great lesson on how to execute this 40-yard flop shot to an elevated green.

Flop Shot to an Elevated Green

So, we're looking at a rather awkward 40-yard pitch shot that's about ten feet below the level of the green, with the flag just over the front of the green apron. The ball will need to carry all the way to the stick. As noted, your first option should be to look at playing some sort of run-up shot. But if the terrain is bumpy and uneven, you would have almost no control over the shot. It could bounce and go almost anywhere and that's not the type of shot we're looking for.  As mentioned, the key element here is the elevation of the green. There are a couple of methods to play this high soft shot. You could cut across like a bunker shot or you can play a flop shot. This shot will result in the ball flying high and landing softly.

We will start with a fairly wide stance, where we sit into our knees and feet. The ball will be forward in our stance. The starting club position at address will have the butt end of the grip actually behind the leading edge of the club face. This means the club face is going to be open quite excessively. 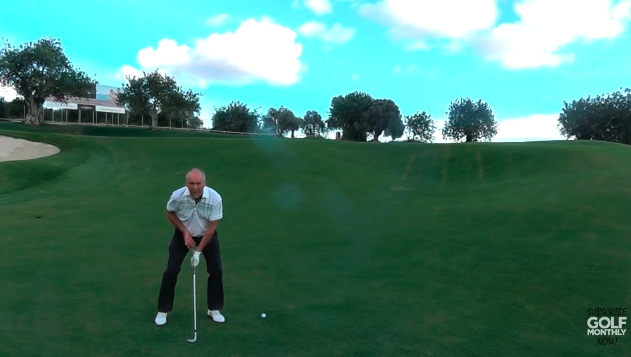 Let's now talk about the backswing. Our goal is to create loft because we want the club to do the work by sliding under the ball so that it comes out high and lands softly.  We want to set the club up where we actually set the wrist backwards. With the wrist coming backward that will give you a lot of loft and get the bounce of the club to really be exaggerated. By exaggerating the bounce, you will help the club to slide under that ball and give it a high floppy tight ball flight. So, with this exaggerated loft as you come down you will release the club. Your right hand is releasing under the left, keeping the loft on the club face. With the ball well forward in your stance, the club is going to come up fairly steeply and the loft you've created will have the ball come out high. The toe of the club will now be pointing behind me at the finish. This will allow the ball to land nice and softly, so if that pins on the front of the green you can just drop it down and it's not going to release out too quickly. 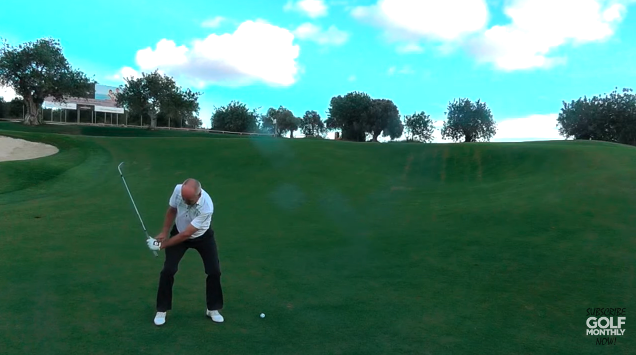 As a reminder, to hit a flop shot, you'll want to use a lofted wedge like a 60-degree lob wedge. Don't forget to accelerate through the shot, sliding under the ball following the slope. Let the club do the work and your ball should come out high and land softly. 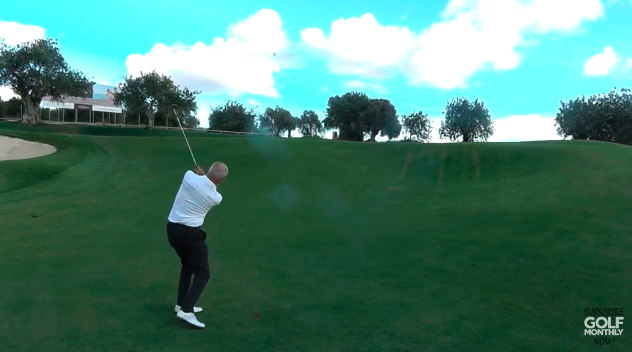 This is a challenging shot to perfect, but one that is needed when the green is elevated and there's no easy path to run the ball up to the green.

HOW DO YOU IMPROVE YOUR 50-YARD PITCH SHOT? The "broken tee drill" will END_OF_DOCUMENT_TOKEN_TO_BE_REPLACED

WHAT'S THE BEST DRILL TO LEARN TO SWING A GOLF CLUB? One of END_OF_DOCUMENT_TOKEN_TO_BE_REPLACED

WHAT ARE GOOD EXERCISES TO INCREASE MY CLUBHEAD SPEED IN GOLF?One of END_OF_DOCUMENT_TOKEN_TO_BE_REPLACED

HOW DO YOU LEARN TO HIT YOUR PUTTS STRAIGHT?Since every putt should END_OF_DOCUMENT_TOKEN_TO_BE_REPLACED