Free Your Mind on the Sand with Annabel Rolley 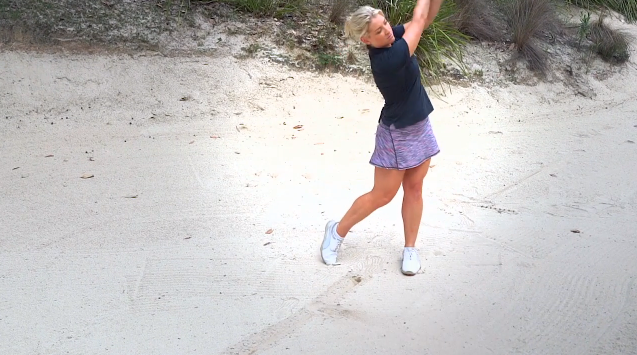 HOW DO I LEARN TO SWING THE GOLF CLUB FREELY AND RELAXED?

For many golfers, the very presence of the golf ball results in them making alterations to their swing such as trying to lift the ball or hit at the ball, rather than allowing the club to just glide and sweep across the ground as they do when the ball isn't present. Annabel Rolley shares a great lesson on the concept of being 'ball-bound' during the golf swing. She credits Bobby Clampett for this idea and terminology, referring to the unwanted swing issues that often arise by the simple presence of the ball versus just swinging freely with no ball. Annabel's advice is to "lose the ball". This can be done to great effect inside of a bunker and by drawing a line in the sand and simply swinging to the line as if there were an imaginary ball sitting there. 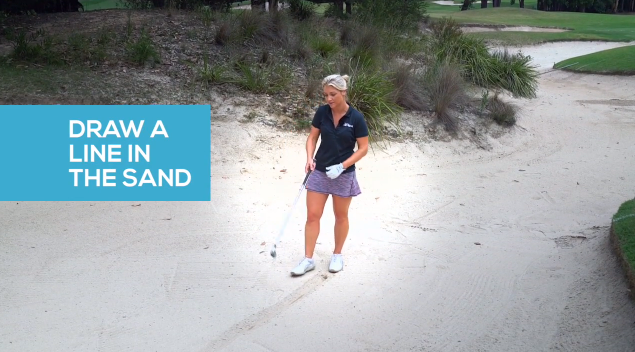 Ball bound factor is a concept and term that was coined by Bobby Clampett. Ball bound factor is the negative psychological and biomechanical impact that is created by the simple presence of a golf ball, when swinging the golf club. The biomechanics of a golfer's swing can be altered just because the ball is there. When the ball is present, some players have a tendency to try and lift the ball up in the air or hit at the ball, when really what you're trying to achieve is a swing that collects the ball with a clean sweeping motion. You're not hitting at the ball; it's just getting in the way. Some believe ball bound factor can be attributed to tension or just that very concept of trying to get the ball in the air instead of just letting your swing and the equipment and the loft of the club do the work for you.

Bring Your Focus to a Tee

To remove this ball bound factor issue there are a number of things that can help you. One of the easiest, but still highly effective, is to place a tee about a foot in front of the ball as a visual focal point. You will now imagine that your hands are being guided to the tee rather than at the ball. This is going to help you take the focus off the ball completely. When you imagine that your hands are going at that tee that's a foot in front of the ball, rather than at the ball, it allows you to release the club freely with no tension. You're far less likely to hit at the ball, you're just going to swing nicely through the ball. So just bring the awareness to the hands and to the tee that's a foot in front rather than the ball. That's should go a long way to eliminating the ball bound factor.

If using a tee to focus on doesn't do the trick, take the ball away. Taking the ball away and just feeling that lovely free and easy swing is such a good drill for you to do.  Practice without the ball and really establish a conscious understanding and feel of just swinging nice and freely. The best way to do this is to practice in the sand. The bunker is a really great place for working on eliminating any ball bound factor for a couple of reasons. One, we're entering a space where there's no golf balls. But even though we're not going to be hitting any golf balls, we'll still be making full aggressive swings. But instead of making contact with a ball, we'll be making contact with the sand. This is going to really get us a nice feeling of making contact with something that's not a ball. And we're still able to swing all the way through and really be aware of our hands. Simply draw a line in the sand. Next take a few swings and imagine that the line has a couple of balls on it.  Swing through the line in the sand nice and smoothly. This will help you reconnect with collecting the ball in the sweet spot of the club, rather than hitting the ball.

Not surprisingly, beginners learn their fundamentals without having them hit a ball. They learn the setup position, how to grip and swing the club. And most of this is done without a ball being present. They start to learn the mechanics and the motion of the swing without worrying about where the ball goes. And funny enough, their biomechanics and their technique are usually pretty good without a ball present. But then go on to stick a ball in front of them and it's this innate desire to want to lift the ball up in the air or hit at the ball as hard as they can instead of just letting that club sweep through nice and smoothly. Whenever you find yourself hitting at the ball or trying to lift the ball, go back to the basics.

HOW DO YOU IMPROVE YOUR 50-YARD PITCH SHOT? The "broken tee drill" will END_OF_DOCUMENT_TOKEN_TO_BE_REPLACED

WHAT'S THE BEST DRILL TO LEARN TO SWING A GOLF CLUB? One of END_OF_DOCUMENT_TOKEN_TO_BE_REPLACED

WHAT ARE GOOD EXERCISES TO INCREASE MY CLUBHEAD SPEED IN GOLF?One of END_OF_DOCUMENT_TOKEN_TO_BE_REPLACED

HOW DO YOU LEARN TO HIT YOUR PUTTS STRAIGHT?Since every putt should END_OF_DOCUMENT_TOKEN_TO_BE_REPLACED