How to Play the Fried Egg Greenside Bunker Shot 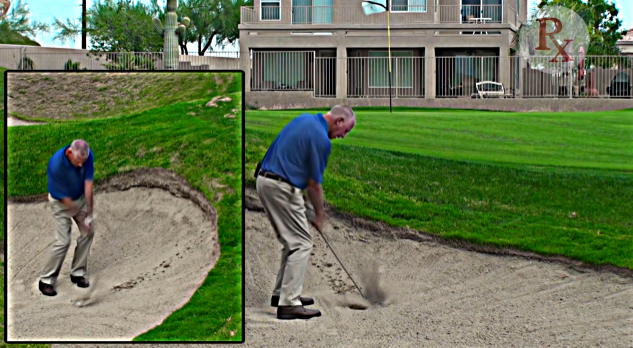 HOW DO YOU PLAY A BURIED LIE GREENSIDE BUNKER SHOT?

You play a buried lie greenside bunker shot with a "pick and chop" stroke, where the leading edge of the sand wedge acts as a digging tool. The clubface must be square to the target line with the handle forward to deloft the clubface. We want the clubface to knife down into the sand. It's important to lean toward the target with our weight on our left foot and use a "pick and chop" motion, which is an up and down kind of swing motion. To help control distance it is important to not stop the swing but swing through the shot.

Above, Scott Bunker - Class A PGA Member and Director of Golf at Red Mountain Ranch Country Club shares a step-by-step lesson and demonstrates how to play a bunker shot when the bottom of the ball is below the surface of the sand. Below, Cindy Miller, 2010 LPGA teaching professional of the year, former LPGA and current Legends LPGA touring professional also gives a wonderful lesson on how to get some bacon from a fried egg and adds the complexity of a very unfavorable lip. 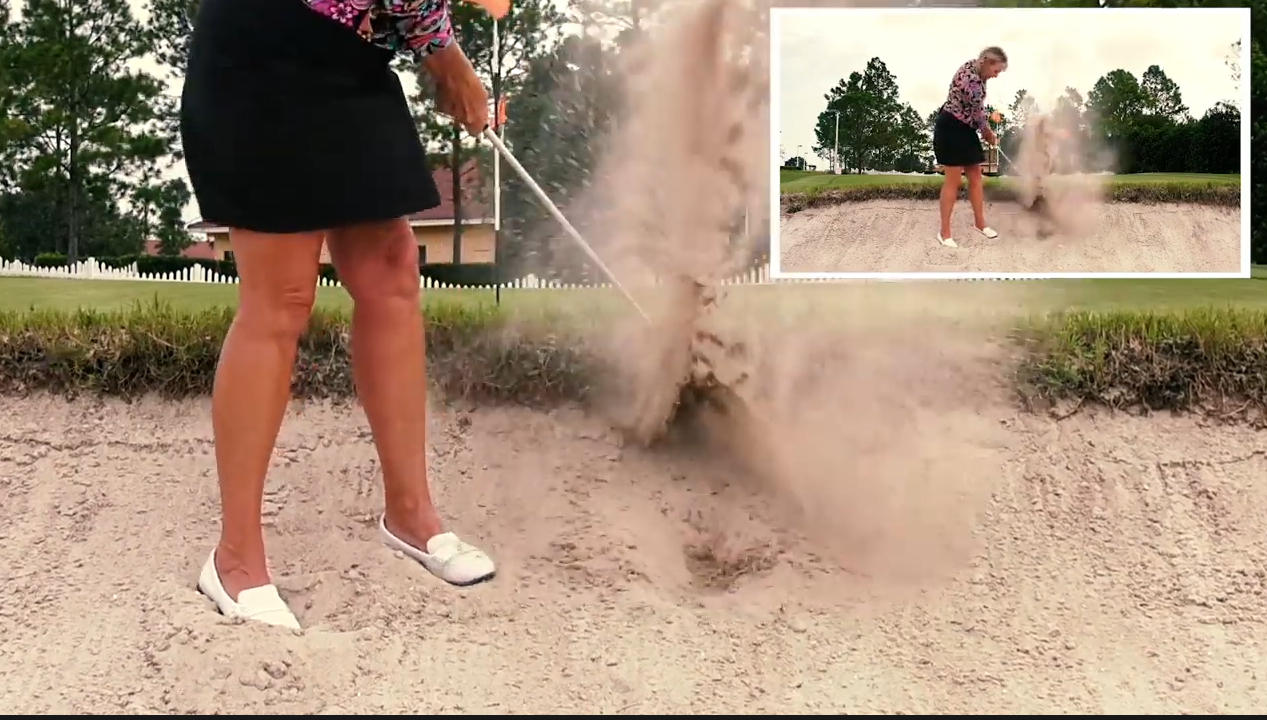 Greenside bunker shots are tough. Finding your ball buried below the surface of the sand looking at a fried egg can be depressing. Finding it buried up against the lip of the bunker, just flat stinks.  The buried lie greenside bunker shot is essentially a trouble shot.  It starts with club selection and setup. Remember, the primary goal is to get it out and onto the green. If you get it close, that's the second strip of bacon.

The first thing you will want to do is assess the lie and the pin placement to understand the amount of green you have to work with. This will help you decide which club you're going to go with. If you don't have much green to work with and have to make a higher lob styled shot, you might choose your 60-degree wedge. The ball is going to come out quite high, so you'll have to go at it more aggressively than normal. If you have some green to work with, you can probably use a 56-degree or 58-degree which will come out lower.

So, to get this ball out of this buried lie, understand when the bottom of the ball is below the surface of the sand, instead of utilizing the bounce edge of the golf club like we do in the basic splash shot, you need to use the leading edge of the wedge as a digging tool. You will start by setting the club handle slightly forward, or what we say is delofting the club. You're going to aim the face at the flag. 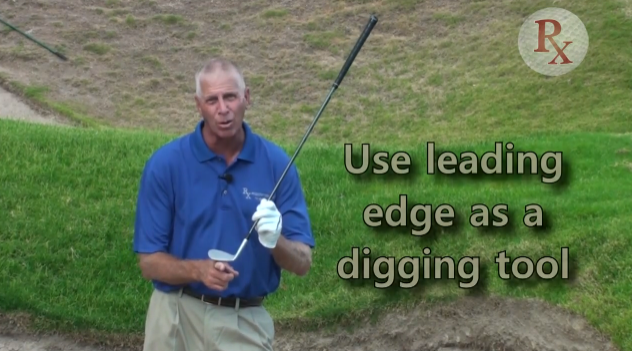 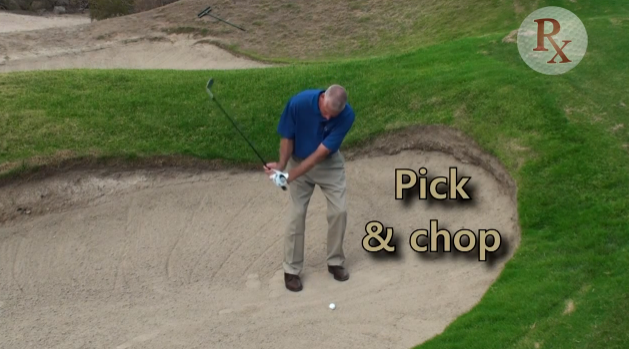 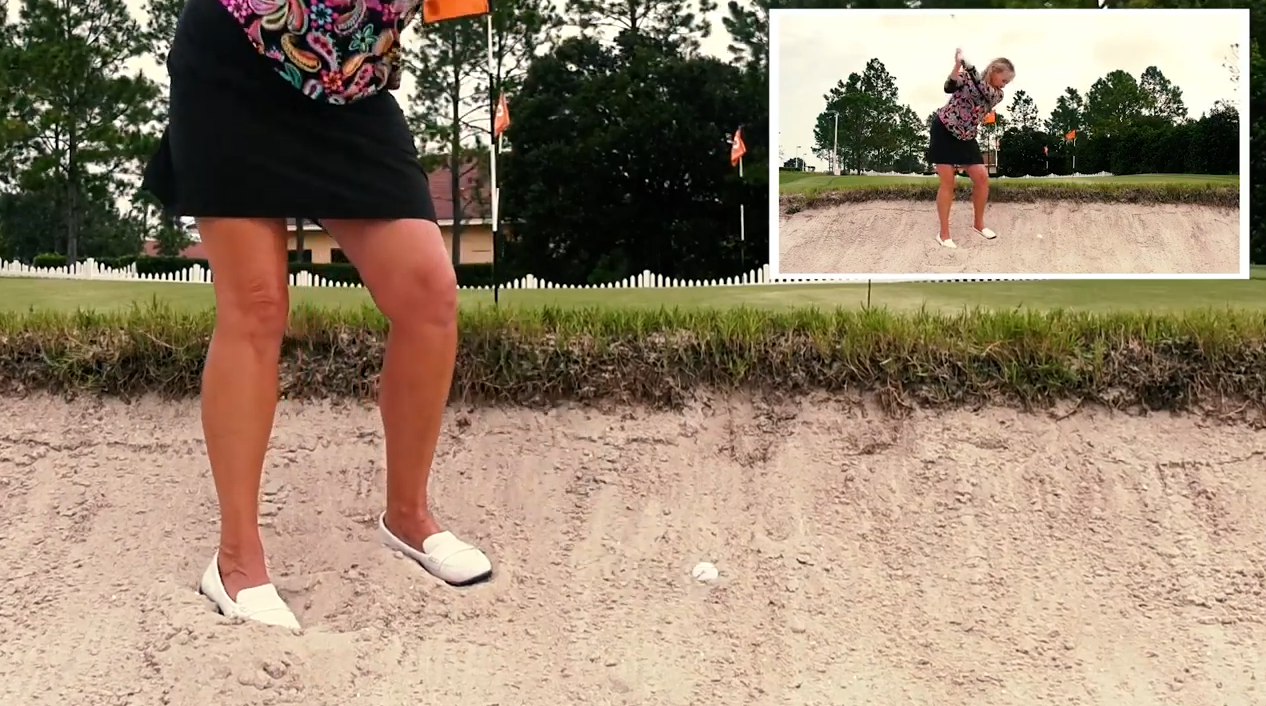 You will actually lean forward toward your target. You will use a slightly steep descending angle of approach to dig this ball out of the buried lie. The swing will be more of an up and down swing which we will call a pick and chop. You will pick the club up and chop down into the sand. That will explode the ball out. Be mindful, when the ball hits the green it's going to tend to release and roll. Since this is essentially a trouble shot, the goal is to get out of the bunker and on the green. Anything close to the pin is a bonus.

Cindy Miller is a graduate of the University of Miami where she began as a walk-on and gained All American status her senior year on the Division I Women’s Golf Team. She served as Team Captain and helped her team win the NCAA National Championships in 1977 and 1978.

A veteran of five U.S. Women’s Opens, she is a former LPGA Tour Player and presently a Class A LPGA Professional. Currently she plays on the Legends Tour, the Official Senior Tour of the LPGA and sits within the top 50 of their career money list.

As a Certified Behavior, Motivation, and Emotional Intelligence Professional, she is sought after as a speaker, coach, and corporate trainer. She uses decades of competitive golf experience and a lifelong pursuit of personal potential to educate participants. She inspires and challenges individuals, teams, and corporations to unlock potential and improve performance. To “Own it”.  Your Business. Your Sport. Your Life.”Voted the 2010 National LPGA Teacher of the Year, she has also been named Player of the Year for the Northeastern United States. Cindy is among “The Top 50 Women Teachers in the United States” ranked by Golf Digest Magazine and The Top 50 Women Teachers in the World by The Women’s Golf Journal.

Although her list of credentials is impressive, perhaps Miller is best known for her appearance on The Golf Channel’s hit reality series The Big Break III: Ladies Only in early 2005. Miller’s patience, skill and steady play propelled her to success on the show, where she outplayed seven other contestants.

She can be seen frequently on Golf Channel, LPGA Women’s Network, and Womensgolf.Com giving her simple yet profound golf tips. She is the co-host of the podcast “The Women of Golf”, a columnist for The Buffalo News, and a Senior Editor for Golf Tips Magazine.

HOW DO YOU IMPROVE YOUR 50-YARD PITCH SHOT? The "broken tee drill" will END_OF_DOCUMENT_TOKEN_TO_BE_REPLACED

WHAT'S THE BEST DRILL TO LEARN TO SWING A GOLF CLUB? One of END_OF_DOCUMENT_TOKEN_TO_BE_REPLACED

WHAT ARE GOOD EXERCISES TO INCREASE MY CLUBHEAD SPEED IN GOLF?One of END_OF_DOCUMENT_TOKEN_TO_BE_REPLACED

HOW DO YOU LEARN TO HIT YOUR PUTTS STRAIGHT?Since every putt should END_OF_DOCUMENT_TOKEN_TO_BE_REPLACED