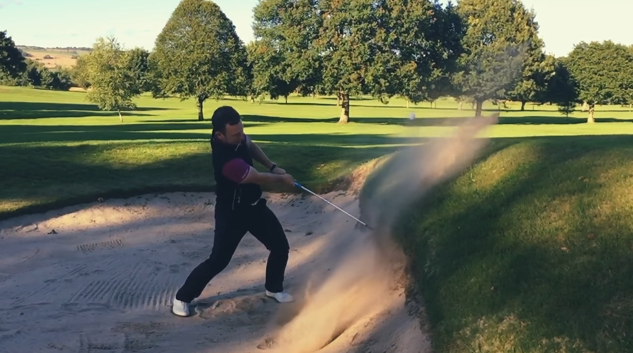 HOW DO YOU GET OUT OF A HIGH-LIPPED GREENSIDE BUNKER?

The key to getting out of a high-lipped greenside bunker is a vertical trajectory, which comes from three things. 1) Choose the right equipment. You will want to look toward your lob wedge. 2) Setup with a wide base and an open club face that you can imagine balancing a tall glass of water. 3) Speed is critical - accelerate your club and let the club face do the work.

PGA Teaching Professional Andy Paisley shares a valuable lesson on playing a greenside bunker shot when the ball sits close to a high-lipped embankment. Don't be anxious; this shot is not that hard; just a few modifications to your setup and let the equipment do the work.

You've hit your shot right up against the lip of the bunker, and it's a very steep lip. So, unless we want to play it 100% safe and hit our ball out the side of the bunker, for this high-lipped bunker shot, we've got to get the ball up very quickly.

First, you have to choose the right club for the job. You want to use a 60-degree lob wedge. In addition to having plenty of loft, the lob wedge doesn't have much bounce, which makes it easier to get underneath the ball.

Your setup is all about creating as much loft as possible. First, have a wide stance with your knees bent, taking you into about a quarter squat position. Next, you want to open the club face so wide that it is vertical to the sky above, and you could balance a glass of water on the club face.

All you're going to do is stay low and swing through. In a good way, this is not that skillful of a shot. It's just a shot that takes some confidence. All you're going to do is hit it hard, follow through, and not be scared that you will hurt your wrists when the club face makes contact with the embankment. Remember, to get the ball out; you want to swing the club with good acceleration and speed at impact with the sand. 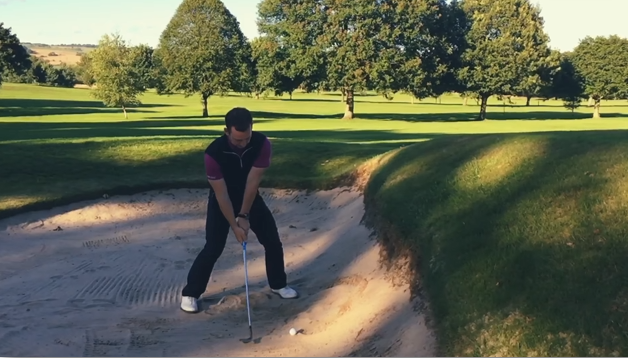 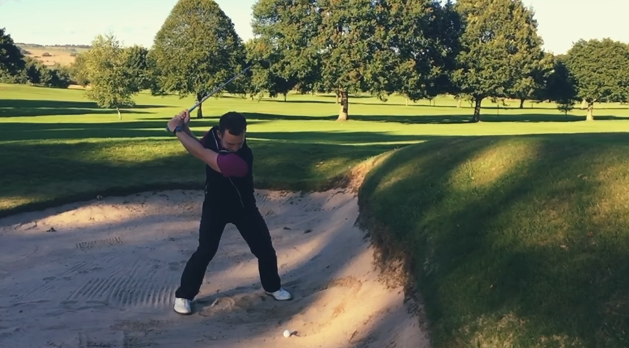 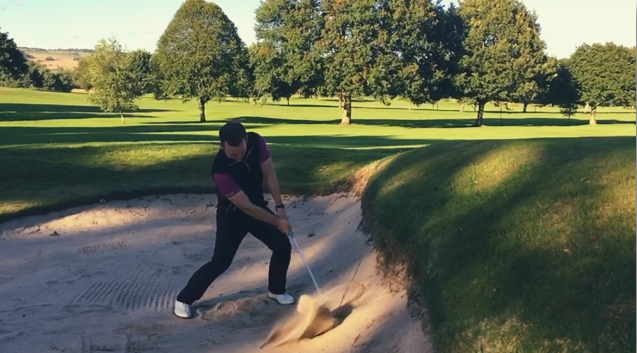 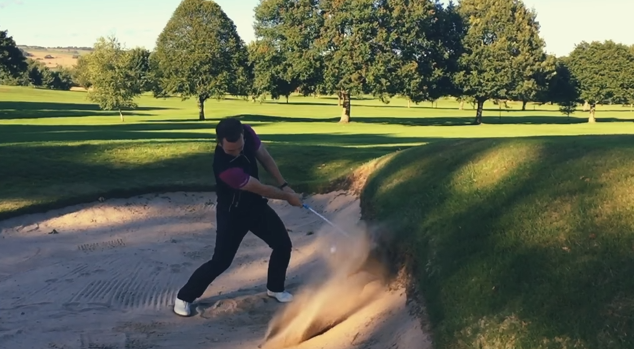 Many people get scared of following through, hitting their club into the embankment, and hurting their wrists. It's essential to understand that you can hit this ground very hard, and it will not hurt your hands. So, give yourself some practice time to get used to this feeling. It's going to be very difficult the first time you try. Go in a practice bunker and have that confidence to hit on a 90-degree angle into the embankment. There are not very many spots in a bunker that you shouldn't be able to get out of with this shot. Again, if you feel like you can't do it, there's no shame in coming out sideways, but with a bit of practice and commitment, there's nowhere in this bunker that that you shouldn't be able to get out. So, keep going to the right club 60-degree lob wedge, a nice wide stance and when you set up - get that clubface looking up to the sky and imagine that you could balance a glass of water on the clubface. Stay low, hit it hard, and remember that bunker face will not hurt you, so don't be scared to hit it.

Andy Paisley is the Head Professional at Hexham Golf Club

Accomplished and respected coach Andy Paisley is the Head Professional at Hexham Golf Club, Northumberland. He has had a successful career both as an amateur and professional.

As an amateur Andy represented England and his County and won the Northumberland County Championship in 2000.

Some of Andy's achievements in coaching include:

HOW DO YOU IMPROVE YOUR 50-YARD PITCH SHOT? The "broken tee drill" will END_OF_DOCUMENT_TOKEN_TO_BE_REPLACED

WHAT'S THE BEST DRILL TO LEARN TO SWING A GOLF CLUB? One of END_OF_DOCUMENT_TOKEN_TO_BE_REPLACED

WHAT ARE GOOD EXERCISES TO INCREASE MY CLUBHEAD SPEED IN GOLF?One of END_OF_DOCUMENT_TOKEN_TO_BE_REPLACED

HOW DO YOU LEARN TO HIT YOUR PUTTS STRAIGHT?Since every putt should END_OF_DOCUMENT_TOKEN_TO_BE_REPLACED