HOW DO YOU GET THE MOST OUT OF YOUR HYBRID GOLF CLUBS?

Use your hybrids to replace your long irons, to play out of fairway bunkers, to chip and run and even putt from off the green. The invention of hybrid clubs is said by many to be the greatest innovation in golf in the last fifty years. These clubs have practically made long irons obsolete. For those who struggle with long irons, hybrids are a welcomed alternative. Though hybrids are definitely more user friendly than long irons, they still need to be used thoughtfully.

So, here's the ways to get the most out of your hybrids.

Use Correct Setup for Your Hybrid

Your address position with your hybrid will closely mirror you setup for your long irons. You need to use good golf posture, proper ball position, good balance and make sure your hybrid is properly aimed.

Good golf posture has you bending forward from your hips and allowing your hands to hang directly below your shoulders. Your hands should come onto the club in a neutral position. Your weight should be balanced on the balls of your feet, allowing you to stay balance through your full swing. This is so critical to hitting successful hybrid shots. If you are in proper balance, you should be able to hold your finish at the end of your swing.

When it comes to ball position, you should think of your hybrid in the same way you think about positioning for a long iron. For most golfers, your club should be positioned relatively centered in your stance. 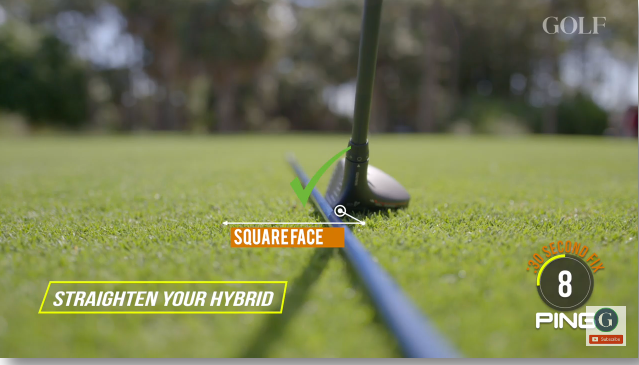 When you aim a hybrid, you want to look at its leading edge. Golf Magazine Top 100 Teacher Mark Durland explains a common setup problem he sees with hybrids which causes needless errant shots. Hybrids or the rescue club can present an optical illusion because the club face looks curved. This leads many players to setup with the club face more open than it should be. A simple way to see this is by putting a straight edge, such as an alignment stick on the ground and then use this as a reference for placing the club face square to your intended target line at setup. You might be surprised to see just how much you need to adjust to get the club face square to that straight edge. But once you've done this a few times, this should help you be aware of the needed club face position for square, straight shots. Then your shot execution should most closely resemble an iron shot with a downward angle of attack.

You can also check the aim of your hybrid by looking at the grip. Make sure the center of the grip, where the branding is, is directly centered on the shaft of the club. This reference point will allow you to set up properly.

Hit Down on the Ball - Making Ball then Turf Contact

Just like with your long irons, you want to make good ball then turf contact - making a dollar bill divot. Hitting down on the ball and through the turf will help send the ball up and toward your target.  Your hybrid will be centered in your stance, so as the club comes into the impact zone, it will strike the ball and then should produce a nice divot in the turf. You want your hybrid to make a small divot, so be careful not to position the ball position too far forward in your stance.

Using Your Hybrid on the Course

Class A PGA Member Scott Bunker is Director of Golf at Red Mountain Ranch Country Club shares a great lesson on the course on how to get the most out of your hybrid. You've hit a good tee shot, but you've still got a long distance to the green on a par 5. You've got an interesting club choice between hitting a low lofted long iron or playing a hybrid (aka - rescue club). The long iron doesn't have a lot of forgiveness. If you happen to hit the ball a little bit off-center, it will be difficult to get very close to the to the green. Alternatively, the hybrid club is far more forgiving. These clubs are bottom weighted making them easier to kick the ball up in the air.  And even if you hit the ball a little bit off-center, because of the club's design, it'll be easier for you to get maximum distance on your shot. The hybrid (rescue club) is an excellent choice. 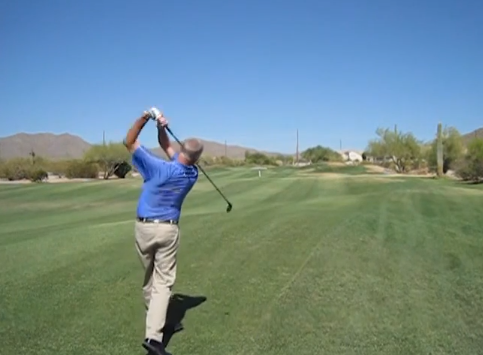 When you're faced with a situation where you have a choice between whether to play a long iron or a hybrid, the hybrid is a club of choice. Maybe even start your set with the five-iron on down, and then consider adding a four and three hybrid to complete your set. For situations where you've got a long way to go - a long iron isn't quite forgiving enough - unless I hit it right on the button. Hybrid is a better choice that'll help you save some strokes in the process.

Use Your Hybrid in Fairway Bunkers

If you need to hit out of a fairway bunker that has a lip, a hybrid can work great because of how well they launch the ball into the air. It's often referred to as a rescue club and this is a situation where it can help you escape to maximize your distance out of a trouble spot.

A chip shot or chip and run with a hybrid club is a very high percentage shot for getting your ball close to the pin, when the fairway runs up to the green with nicely mowed grass. This shot can resemble a long putt with the goal of flying the ball only about 1/3 of the total distance in the air, skipping over the grass, and the final 2/3rds to roll out.

LPGA & Callaway Pro Belén Mozo shares an excellent alternative for a common shot just off the green where you have tight grass and no obstacles that must be cleared. This shot is frequently taken using your putter, but there's another club in your bag that might be even better for this shot - your hybrid or rescue club. When using the hybrid, you will want to setup very similarly to a putting setup, but with a bit more weight on your target side leg. You will want to choke down on the grip and approach the shot very similarly to a putt. The nice big and forgiving sweet spot of the hybrid will allow you to take less backstroke and that means less opportunity for error. Give this shot a try - it could save you strokes around the green. 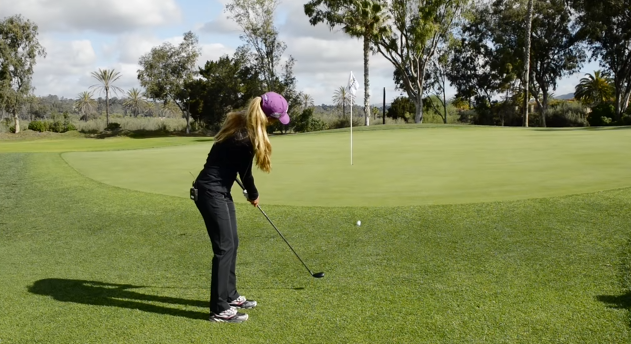 Mark grew up in a small town in Northeastern Pennsylvania.  He began his golf career at the age of twelve, playing with his father in a weekly golf league.

Mark continued his golf career at Gannon University in Erie, PA.  He played two full seasons before passing his Playing Ability Test to become a registered apprentice of the PGA.  He interned at Lake Shore Country Club in Erie, PA until he graduated from college in 1997.  After college he worked his first winter in Naples, FL at Imperial Golf Club.

The following winter, Mark was afforded the opportunity to work at Naples National Golf Club.  During his tenure, he had the privilege to meet and observe such teachers as Gene Sarazen, David Leadbetter, Craig Harmon, Bob Ford, Lonnie Nielsen and John Calabria.  He spent the summer of 1999 teaching at Huntsville Golf Club in Shavertown, PA.

Mark was offered the opportunity to work at Naples Grande Golf Club in April 2000, shortly after the club opened.  He became a PGA Member in September of the same year.  While working for Naples Grande, he had the privilege of teaching alongside Top 100 Golf Instructors:  James Sieckmann, Mark Wood, Tom Patri, Jon Tattersall and Eden Foster.  He also assisted with Dave Pelz Short Game Schools and Nicklaus-Flick Golf Schools.

Mark plays golf left-handed and is a proponent of proper impact fundamentals.  He bases his communication with students on simplicity.  Currently, he is the Director of Instruction at the Durland Golf School at Naples Grande which he helped establish in October 2005.

Belen Mozo is one of the happiest players in professional golf and she’s got a lot of game to go with her positive attitude. She was a 4-time All-American at USC and as an amateur she became the first player since 1972 to win both the Women’s British Amateur Championship and the British Girls Amateur Championship.

Last year she had a very good season on Tour and as a member of Team Spain she won the inaugural International Crown while posting a 2-1-1 record. She’s been a consistent player on Tour since she turned professional in 2010 and now that she’s on #TeamCallaway, we know she’s ready to win again and again.

HOW DO YOU IMPROVE YOUR 50-YARD PITCH SHOT? The "broken tee drill" will END_OF_DOCUMENT_TOKEN_TO_BE_REPLACED

WHAT'S THE BEST DRILL TO LEARN TO SWING A GOLF CLUB? One of END_OF_DOCUMENT_TOKEN_TO_BE_REPLACED

WHAT ARE GOOD EXERCISES TO INCREASE MY CLUBHEAD SPEED IN GOLF?One of END_OF_DOCUMENT_TOKEN_TO_BE_REPLACED

HOW DO YOU LEARN TO HIT YOUR PUTTS STRAIGHT?Since every putt should END_OF_DOCUMENT_TOKEN_TO_BE_REPLACED