How to Hit a Low Punch Shot!

HOW DO YOU HIT A LOW PUNCH SHOT?

You hit a low trajectory punch shot by:

The low trajectory punch shot is a must have shot for getting your ball out of trouble and back in play. 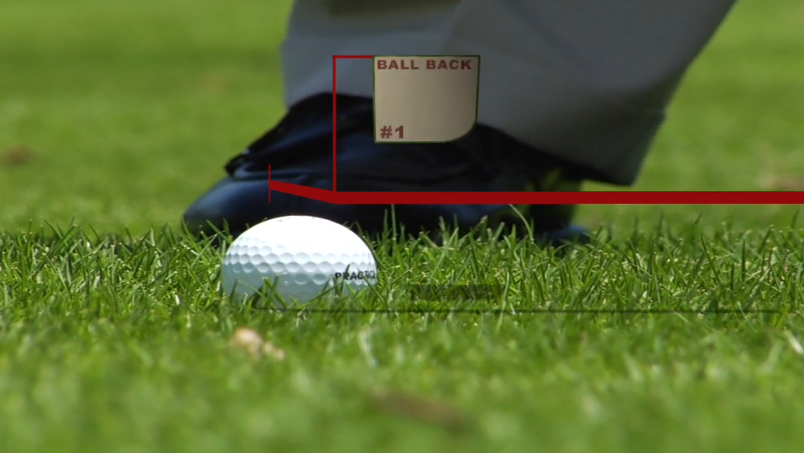 Wouldn't it be wonderful if all of our shots could be taken from the middle of the fairway, free of any obstructions? Well, that's called TopGolf, not Golf. Even the tour pro's hit errant shots that demand either creativity and risk or conversely - safety and conservatism. Sometimes it's just best to take our medicine and get our ball safely back in play.

Your address position will have the ball positioned back in your stance, which will provide some natural delofting of your club. 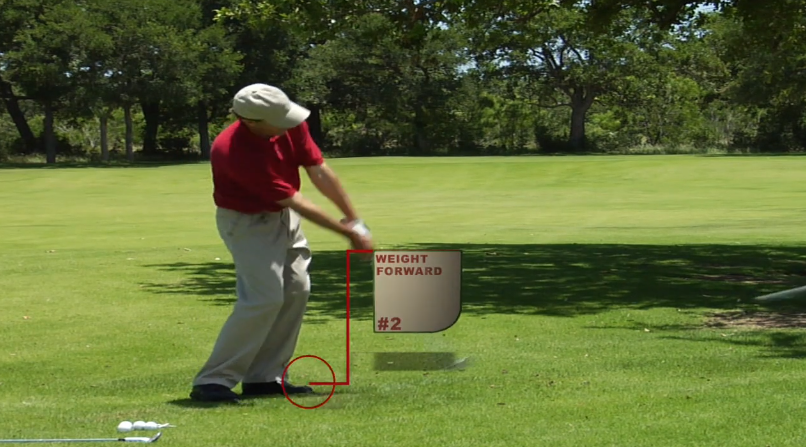 You should place a little extra weight on your target side leg. You want to keep your head and sternum forward over the ball to just slightly forward.  This will also help the ball come out low. 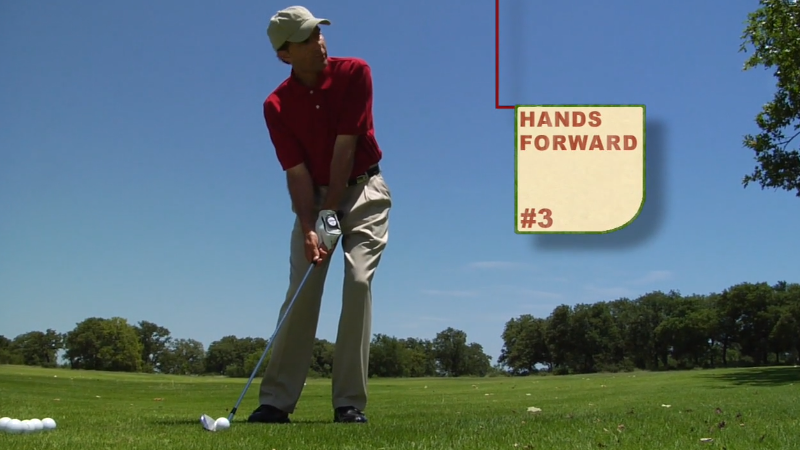 You will use an abbreviated backswing. It might be 1/2 to 3/4 backswing depending on the situation. Use a nice smooth/soft swing and make a controlled finish. This finish will ensure that your hands stay low and forward through the impact zone. 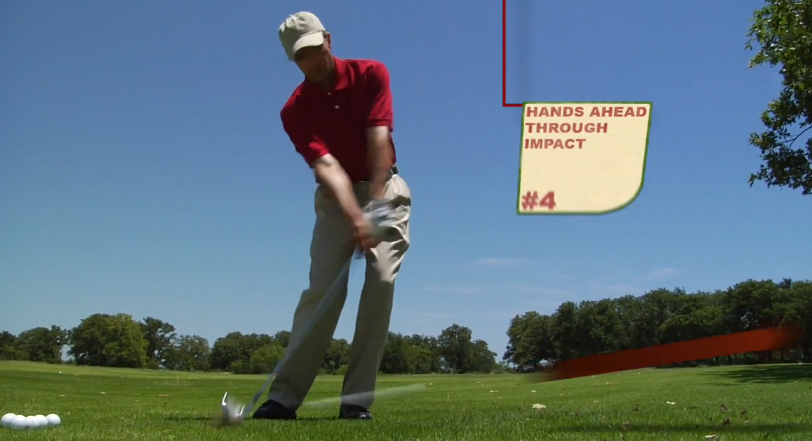 In your downswing you will drag the club through the impact zone, keeping your hands low and forward of the clubhead into the follow through. 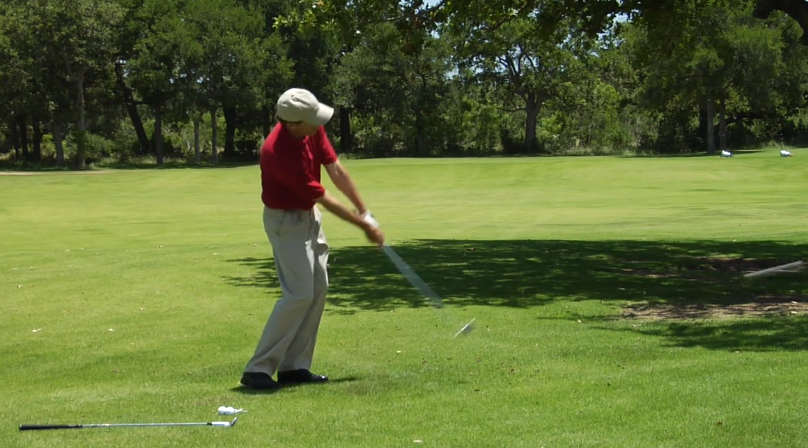 These are the keys to getting your ball out of trouble and back in play. This is not a hero shot. Quite the opposite. This is a safety shot to preserve your round. It's an important shot that you know you need. That's what I'm talk'in about. 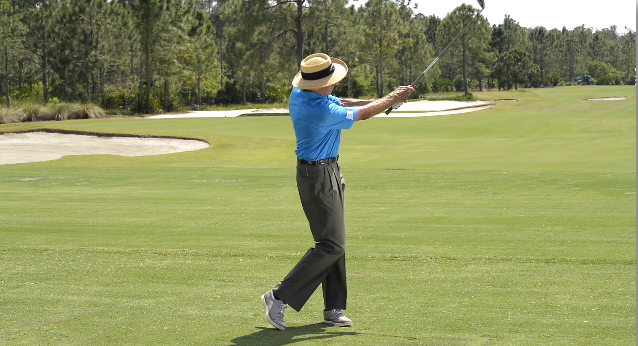 There are going to be times when you're going to have to need to know how to hit a low punch shot.  Maybe you've hit it just up the fairway and there's some overhanging limbs and you need to advance the ball forward. The most important thing is getting the ball back into play. For these times, legendary golf coach David Leadbetter explains a four-step plan on how to hit these punch shots.

The first thing is you want to make sure you take a club with less loft. You want to club up by at least two clubs depending on what's in front of you. Obviously, you have to make sure you can get over any obstacles like shrubbery or tall grass. If it's just pine needles and sticks, that will not be a problem.

The short follow-through will ensure that your hands are leading the club. You don't want the club leading the hands, because that will send the ball up in the air, and we're doing everything we can to keep the ball down.

Finally make sure the motion is nice and smooth. Don't try to hit it too hard - it's a "soft punch" if you will.

Punch it from the Pines

Mark Hackett, Golf Magazine Top 100 teacher and Director of Instruction at Old Palm Golf Club in Palm Beach Gardens, Florida, shares a sage lesson about getting out of trouble.

The key to recovery shots is to stay calm you take your medicine. From pine needles and cones to low branches or tall rough - it's a matter of setting up for success. The problem is that too many golfers try to hit the heroic shot, which is a recipe for creating a higher number for your scorecard. The key is calmness and using your golf brain to maneuver the ball back into the fairway. 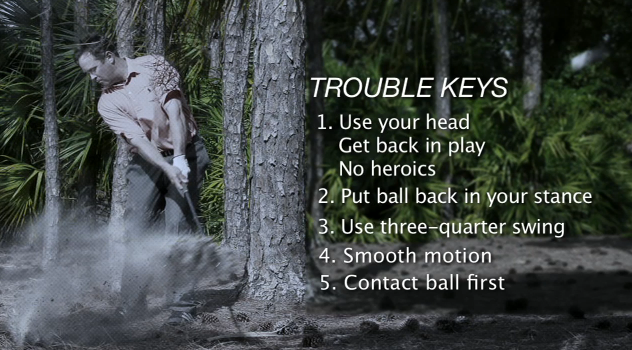 Set up for success, take your medicine and move forward.

Originally from Worthing in Sussex, England, David began his career in golf on the European and South African Tours. He soon realized his interest was in the technique, mechanics, and intricacies of the game, which eventually led him to spend more time teaching than playing. David’s career took off in the mid-1980s through his documented work with Sir Nick Faldo which produced 26 Majors.

Soon after David’s retirement from playing, he began to incorporate his methods and philosophies into a stringent, holistic training program for qualified instructors that remains unmatched even today.

Since launching the first Leadbetter Golf Academy over 30 years ago, David has coached players to 26 Major Championship titles and over 100 individual worldwide tournament victories. Seven of those players have even held first place in the Official World Golf Ranking.

With a desire to bring that same world-class instruction to players of all ages and abilities, and in addition to the numerous articles written for publications like Golf Digest and Golf International over the past three decades, David has authored eight books on the topic. Together, David’s books have sold two million copies making him one of the best-selling golf instruction authors in the world. His latest book, The A Swing, was released in May 2015 is set to transform the golf swing once again.

Additionally, David has produced a number of instructional videos, DVDs, an interactive video game, and other mixed media, and developed training aids—including the SwingSetter, SwingSetter Pro and a number of A Swing approved training aids released with the book—all dedicated to helping people play better golf.

Mark Hackett, honored by Golf Magazine as one of the Top 100 golf teachers in the country out of 28,000 members of the PGA of America and Director of Instruction at Old Palm Golf Club in Palm Beach Gardens, Florida.

Mark Hackett received his first golf lesson from Davis Love, Jr. at the Sea Island Golf Club in Georgia. At the time Hackett was 15 years old, and these first golf lessons instilled in him a love of the game and a love of instruction of the game. This passion was enhanced when Love introduced him to golf teacher extraordinaire Bob Toski, who taught him the “cause and effect” method of teaching golf.

Hackett earned his degree from the University of Central Florida and has been certified by Titleist Club Fitting System. Since becoming a PGA Professional, he has not only taught at some of the most prestigious golfing facilities, such as the Golf Digest Schools, but he has worked at some of the best as well.

Since 2009, he has been honored by Golf Magazine as one of the Golf Magazine Top 100 Golf Instructors in the country out of 29,000 members of the PGA of America.

HOW DO YOU IMPROVE YOUR 50-YARD PITCH SHOT? The "broken tee drill" will END_OF_DOCUMENT_TOKEN_TO_BE_REPLACED

WHAT'S THE BEST DRILL TO LEARN TO SWING A GOLF CLUB? One of END_OF_DOCUMENT_TOKEN_TO_BE_REPLACED

WHAT ARE GOOD EXERCISES TO INCREASE MY CLUBHEAD SPEED IN GOLF?One of END_OF_DOCUMENT_TOKEN_TO_BE_REPLACED

HOW DO YOU LEARN TO HIT YOUR PUTTS STRAIGHT?Since every putt should END_OF_DOCUMENT_TOKEN_TO_BE_REPLACED