A Hybrid Way to Chip a Golf Ball 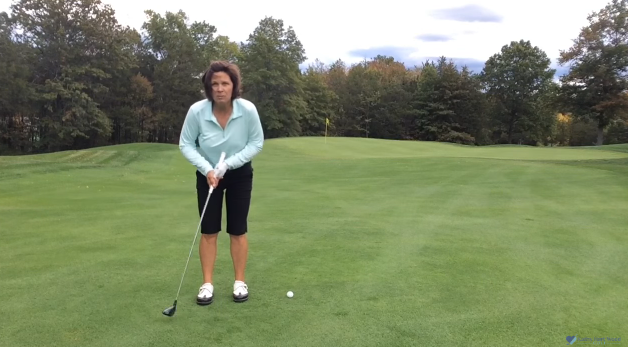 WHEN SHOULD YOU HIT A HYBRID CLUB CHIP AND RUN SHOT?

A chip shot or chip and run with a hybrid club is a very high percentage shot for getting your ball close to the pin, when the fairway runs up to the green with nicely mowed grass. This shot can resemble a long putt with the goal of flying the ball only about 1/3 of the total distance in the air, skipping over the grass, and the final 2/3rds to roll out. Kathy Hart Wood is a Golf Digest’s Top 50 Best Women Golf Teachers in America. She gives a great lesson in using your hybrid to putt the ball from off the green in lieu of using a wedge to chip the ball. A hybrid can be used in so many novel ways, it's sort of like a Swiss army club.

Chipping can be a real problem for a lot of golfers. They struggle to keep their wrists out of the shot, and they end up flying the ball over the green or sculling the ball a lot. An alternative to the conventional chip shot with a wedge is chipping with your hybrid. 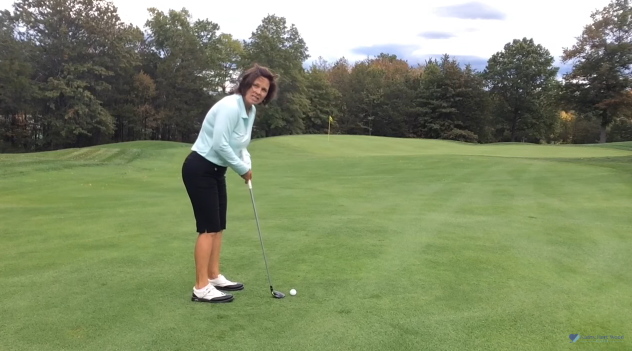 It's a great option and a highly reliable shot if you learn to set up to it properly. You should use a four or five hybrid. You're going to set up to the hybrid as if it was a putter, which means that you're going to make the shaft of the hybrid very vertical like a putter. You'll stand closer to the ball, and the hybrid is going to rest pretty much on the toe of the club. You should set up to the ball so that the ball is just a little bit in front of center, and you feel like your eyes are over the ball. You're going to use your putting grip, so your elbows might be out a little bit to your sides. Finally, you're going make a putting stroke. Because of the loft on the hybrid, the ball is going to get up in the air a little bit and skip over this closely mowed grass area and roll up onto the green. 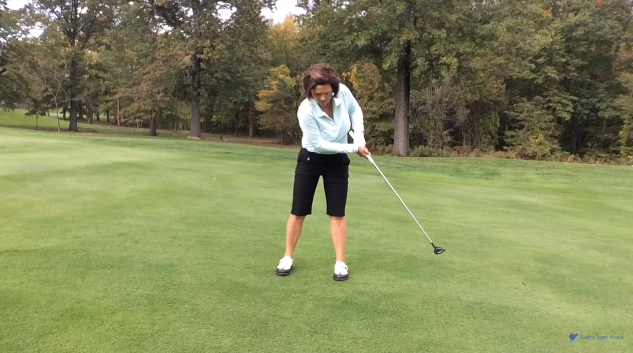 This hybrid putt shot is really only effective when you have fairway running up into the green because the ball is going to skip and would get caught in the longer grass. So, if you're in this situation where you've got a lot of fairway and can bounce your ball up onto the green try your hybrid.

So, you've run over the back of the green and down a small slope and find yourself in an awkward situation. Of course, you could putt the ball up the slope or even chip it, but there's yet another way to play this shot with your hybrid or rescue club. Tom Richardson, Professional at Royal Lytham and Saint Anne's Golf Club shares a great lesson in how to use your hybrid as your rescue putter. 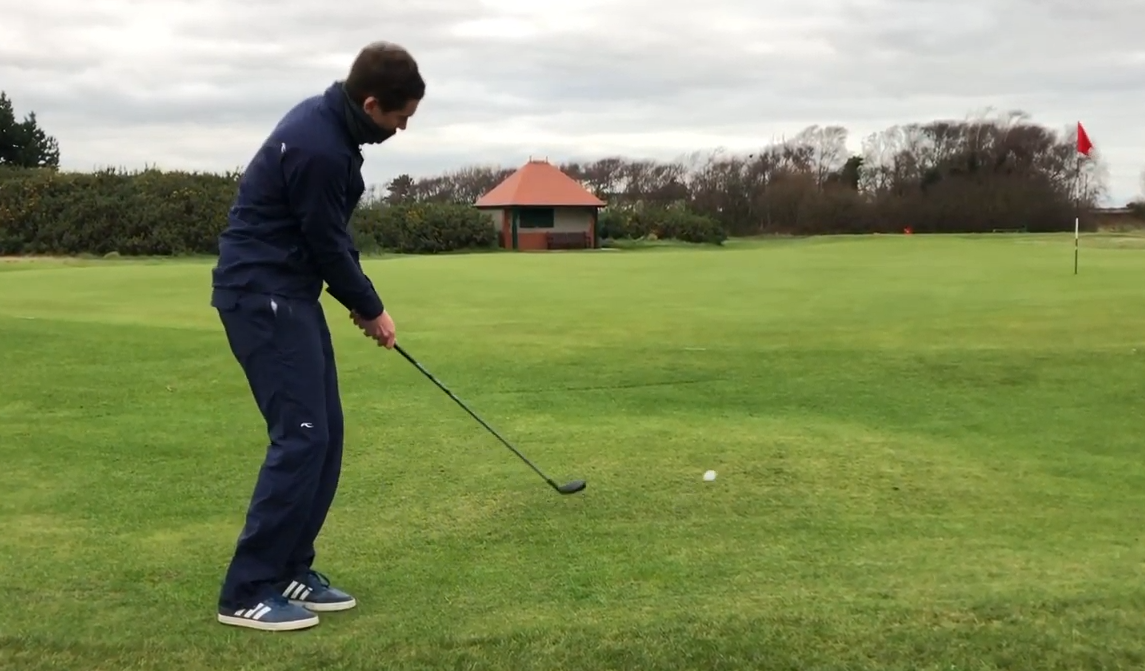 Some people might be thinking that a hybrid is designed for longer shots, but on a shorter shot like being just off the green in mowed grass or up against the collar of the fringe, it's really useful because it's got quite a powerful face, so to get this ball up the slope we don't need to hit it particularly hard. If we were going to putt the ball, we would need to make quite a long backswing and forward swing, which can often be hard to control. But with the hybrid, it's going to make the shot a little bit easier for us.

The set-up to play this shot is slightly different than normal. You need to bring your feet slightly closer together, about a club head apart. We're going to stand nice and close to the ball which means we can get grip down almost to the graphite on the shaft and it gives us the ultimate control on this short shot. It's just a short swing back and through, very much like a putting action.

Another time this shot is really useful is when your ball has run off the green and run up against the collar between the first cut and the second cut. So normally this would be an awkward shot to try and play a wedge, because you've got to try and get through the semi rough to get to the ball and a putter is even more difficult. We're just going to use the hybrid again and it's going to help us just pop that ball up and roll it down towards a flag. We just need to try and hit down into the back of the golf ball a little bit more, so we don't have any interference from that cut of rough.

Just Say No to the Lob Wedge

Who doesn't like the idea of hitting a high and soft lob shot that gently bites and spins back toward the pin? It's so tempting to grab your 60-degree lob wedge and try and hit it high and soft. But this is pretty much horrible course management whenever you have a safer option like a traditional chip and run shot available to you. For example, with the lob or flop shots, you can hit the grass, you can hit it fat, you can hit it thin. If any of those happen, it's going to add lots of shots to your score. We don't want that. So, when you've got room between yourself, and the pin and you can roll the ball, that's when you want to hit the chip and run not the flop shot.

The Chip and Run Shot

Chip and run shots start with proper club selection. You should use your seven, eight, nine iron or hybrid. You want to think one third of the shot in the air and two thirds rolling on the ground. The goal is to take out as many high-risk variables as possible.

We want some nice acceleration through the ball just sweeping the ground and hold that finished position. Pick your spot one third of the way to the hole, where the ball is going to land, allowing for about two thirds release and roll on the ground. Ball position should usually be just a little forward of center. A ball position that is more forward will result in a higher trajectory and more airtime. A ball position that is back will result in lower trajectory shots with a lower risk of hitting fat or thin. In all instances, you will want to use good rhythm with good acceleration through impact, firm wrists, and an abbreviated follow-through. This is your traditional chip and run shot.

So put the lob wedge away grab seven, eight or nine iron for the chip and run. Keep it Simple. It'll reduce your scores.

HOW DO YOU IMPROVE YOUR 50-YARD PITCH SHOT? The "broken tee drill" will END_OF_DOCUMENT_TOKEN_TO_BE_REPLACED

WHAT'S THE BEST DRILL TO LEARN TO SWING A GOLF CLUB? One of END_OF_DOCUMENT_TOKEN_TO_BE_REPLACED

WHAT ARE GOOD EXERCISES TO INCREASE MY CLUBHEAD SPEED IN GOLF?One of END_OF_DOCUMENT_TOKEN_TO_BE_REPLACED

HOW DO YOU LEARN TO HIT YOUR PUTTS STRAIGHT?Since every putt should END_OF_DOCUMENT_TOKEN_TO_BE_REPLACED