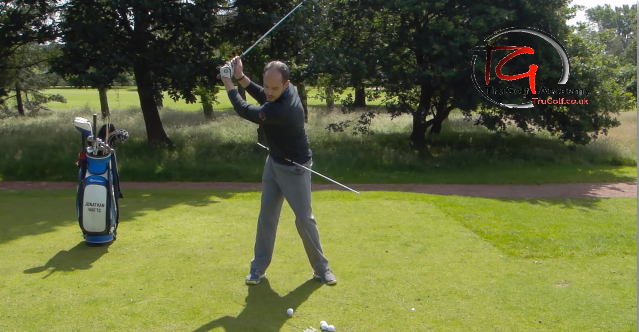 HOW DO I IMPROVE MY CLUBHEAD SPEED IN MY GOLF SWING?

You can generate more clubhead speed by getting your lower body to rotate first and your upper body following behind and catching up directly after impact with the golf ball. Director of Instruction at the TruGolf Academy Jon Watts presents a great lesson on how to improve your clubhead speed in your golf swing. Using some very clever visual aids to teach you the relationship between your lower and upper body rotation in the backswing which becomes your source of power in the downswing. By placing an alignment stick through the belt loops of your trousers across your hips you can very clearly see your hip rotation plane. Hopefully, it is circular with minimal lateral movement. Hip flexibility will vary between golfers but 30 to 45-degree hip rotation is fairly typical. By placing a club across your chest, you can now see the rotation of the upper body relative to the lower body rotation. Again, hopefully, both are rotating on the same plane, but the upper body should rotate in the range of 90 degrees or more. The difference between the amount of upper and lower body rotation is referred to as the X-factor stretch.

Disassociation Between the Upper Body and the Lower Body

The transition is the brief stage of the golf swing when the golf club reaches the top of the backswing and is just starting into the downswing. In the transition we want to look at the connection or the disconnection between what's happening with the lower body and the upper body. We don't want both our upper body and our lower body working at the same time and speed.

To demonstrate this desired body movement and synchronization, we have a simple visual aid, which is an alignment stick placed through you belt loops. You can also use a little bit of cord with some velcro on it, so it's actually tied around your back and sits it right across your hip bones. This provides an idea of the actual amount to hip rotation in the back swing and the start of the downswing. When the alignment stick is through your belt loops, there will tend to be a little bit of slack, and it will move a little bit more, but it will still give you a good idea and a good feel of what your hip rotation.

The exercise you should perform is to put a 7-iron across your shoulders and then cross your arms across to your chest.  Hold it in you're going to be focusing on the golf ball trying to keep your head relatively still. Now make a back swing. What we're aiming for here is about 90 degrees of shoulder turn and my hips have turned about 35 to 40 degrees. The gap between your shoulder and hip rotation, at 40 degrees of hip turn a 90-degree shoulder turn is a 50-degree x-factor stretch. We're trying to increase that gap. This brings more clubhead speed, more power and more distance. The bigger that gap between our upper body and lower body as we start the downswing in our transition the more speed, we're going to be able to generate through impact. The best in the world at this is Rory McIlroy. With a driver, his figures are 105-degrees of shoulder turn with only 45-degrees a hip turn. He's got a huge x-factor to stretch. 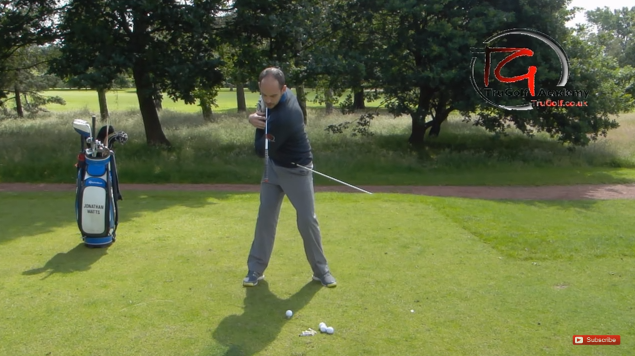 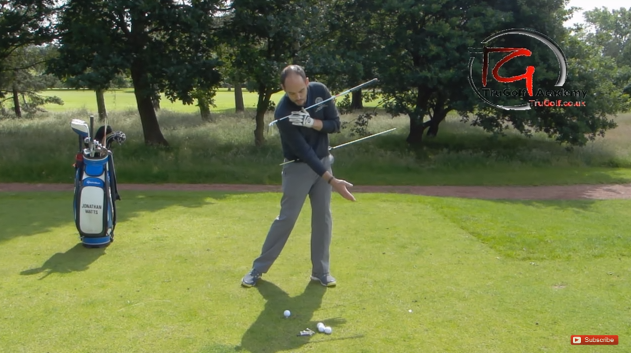 The first exercise was the club across your shoulders and the alignment stick across your hips - then wind up to the top of the backswing and try and start your downswing with the lower body first. The upper body shouldn't catch up with a lower body until about two foot after impact, at which point your hips should be around 30 to 35 degrees open. Your shoulders should catch up and marry up with your hips after you've hit the golf ball. One of the big problems we see with a lot of golfers is that they are leading their downswing with their upper body. Their upper body will actually catch up to the lower body before they ever hit the golf ball. This means they're generating the highest speeds of their golf swing at the midpoint of the downswing and actually slowing down into impact. We don't want that. 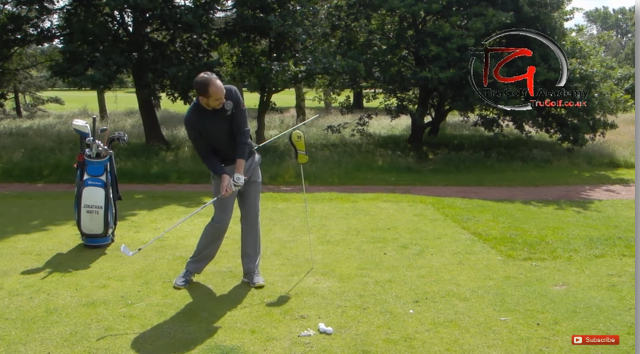 Jon Watts - Director of Instruction at the TruGolf Academy

I started playing golf at the age of 12 and was lucky enough to win a scholarship to the local club through school. After school, I went on to study Sports Science at college and then a Golf Management course at university. Subjects covered, such as Sport Psychology, Golf Coaching, Green-keeping and Finance gave me a good head start with my career in golf.
After graduating with distinction, I started work at the Belfry. Here I've undertaken a variety of roles, including Golf Academy Supervisor and Senior Custom Fit Specialist.

My Custom fitting experience enabled me to work with TaylorMade, fitting a number of their European Tour & Challenge Tour Players, running their only Motion Analysis System (MAT-T) in Europe at the time. I was also a regular Club tester for Today’s Golfer magazine and lectured Custom fitting for the PGA.

While at the Belfry, I was very proud to have graduated 3rd in the country with my PGA exams and since this time I've been busy teaching golfers of all levels and learning from some of the world's best teachers.
For the four years up to April 2013, I was working at Brocton Hall Golf Club as the Head Teaching Professional. My time there has been spent coaching a range of golfers from beginners to Professionals. I regularly attend National Coaching conferences and courses to learn from world leaders in all areas of the game. In 2010 I was chosen as a Staffordshire County Academy Coach and in 2011 coach to Stafford University.

In April 2013, I accepted the position as Head Professional at Drayton Park Golf Club and founded the TruGolf Academy.

I am now offering individual lessons at an Indoor Golf Studio and have an outdoor chipping and putting area complete with a Huxley Green and two large bunkers.

HOW DO YOU IMPROVE YOUR 50-YARD PITCH SHOT? The "broken tee drill" will END_OF_DOCUMENT_TOKEN_TO_BE_REPLACED

WHAT'S THE BEST DRILL TO LEARN TO SWING A GOLF CLUB? One of END_OF_DOCUMENT_TOKEN_TO_BE_REPLACED

WHAT ARE GOOD EXERCISES TO INCREASE MY CLUBHEAD SPEED IN GOLF?One of END_OF_DOCUMENT_TOKEN_TO_BE_REPLACED

HOW DO YOU LEARN TO HIT YOUR PUTTS STRAIGHT?Since every putt should END_OF_DOCUMENT_TOKEN_TO_BE_REPLACED